This, ladies and gents, is going to be a lonnng post. After being shown up with Lauren’s fabulous photos, and some feedback that process photos are just as good as the final product, I’m making a grandiose attempt to document this cake.

Bri’s birthday was this Monday, so of course, she being my partner in cake crime for quite a few endeavors, I couldn’t let her down! I wracked my brains for quite a while before deciding on a design, as the title of this post suggests. Besides her great love of home appliances (and I wasn’t about to mold a giant Kitchenaid stand mixer out of cake, that’s just too much irony for me), I settled on the cute, loveable Curious George. Watching this perky little monkey movie was quite possibly the only time I had ever heard her gush about anything- she’s not a gusher- and by “gush,” I mean, “Oh, he’s so cute.”

Okay, enough, let’s get on with the show or this will be like reading War n’ Peace.

The “vision” was to do a Curious George hiding under the Yellow (Cheddar, will explain later) hat on a mini-cake, surrounded by a few accent cupcakes.

I started with the hat, made of two cupcakes- a regular size and a Texas size: 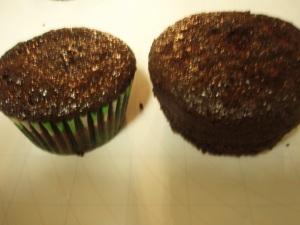 I then flipped them both upside down……Frosted and assembled them like a mini cake….. and covered it in the Cheddar fondant. 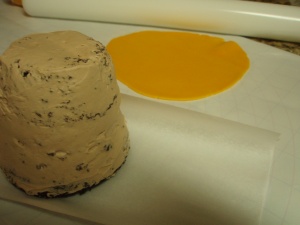 Break for the “cheddar” explanation: I was worried about the fondant not being “yellow” enough, and asked Meg for her opinion, as she was my designated taste tester and motivator. She’s pretty easy-going on the details, so she first said, “I’m sure it’s fine.” But when I held it out to her, she goes, “Oh… my…. it is looking a bit cheddar.” That cracked me up, and I decided to keep it. I got lots of cheese comments later at the dinner! 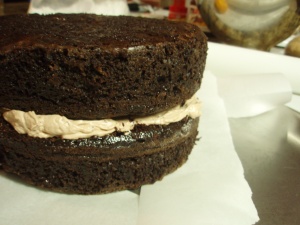 Did I mention that the flavor was chocolate with Nutella buttercream? Bri loves the nutella, I was just hoping no one was allergic to nuts! nom nom nom….

Here is the making of the brim of the yellow hat. I knew that I’d be happy that I saved the plastic lid to that cheese tub! Perfect diameter and sharp edge resembling a cookie cutter.

Holding the place for Mr. George to tuck his mischievous face!

Why Hello George, where has your face gone? (Modeled with fondant, brown and tan)

Found it! I cheated at this part, it’s actually permanent marker, but who’s barbaric enough to want to nosh on the monkey head?!

Set atop the cake, he looks pretty content and chillin’.

Ah, but we are not done yet! The fun has just begun…

What are these? What is a monkey who doesn’t like bananas! (Modeled with cheddar fondant and a little brown food coloring streaked and gently kneaded into them)…. 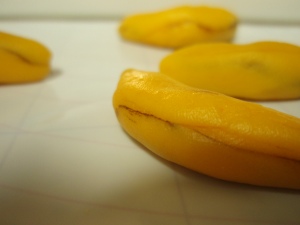 And…. cupcakes with some piped nutella buttercream: 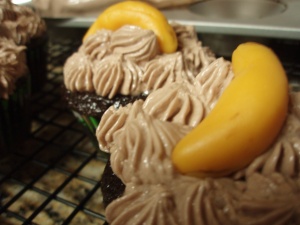 Let’s not forget the reason for the cake! A little extra fondant, flattened into a banana banner, and pegged with some inedible permanent marker (sorry, laziness began to settle in at this point). 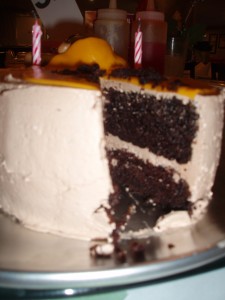 … when they are made out of carrots!

My buddy Dan requested carrot cake cupcakes for his birthday. Seriously, I love carrot cake. But I honestly thought that other people didn’t, and that it was something you’re just born with tastebuds for. Like coconut.

Anyways, I leaned on good ol’ Martha Stewart for  some guidance with this one. It’s a terrific recipe, but just reading how much sugar in it made me cringe. I always do a little less than, because it tastes the same and the frosting definitely makes up for 1/4-1/3 less cup sugar in the batter. As far as I know, no other baking catastrophes have resulted from a little less suga’ so that’s how I’ll leave it.

Cream butter and cream cheese with electric mixer till light n’ fluffy. Add in powdered sugar, a little at a time, then vanilla. Yum!

Megs and I baked these at her place, so that’s bonus #1: A different setting with non-fluorescent lights in the kitchen for photos to follow. Bonus #2 is…. the photos weren’t taken by me! These were taken by none other than Miss Lauren, who made the cupcakes look gooooooood. Thanks to these girls!

Let’s get the show on the road… First things first, grate the carrots.

Yep, I use a peeler. I find that grating is a pain, and peeling the carrot is faster. Additionally I think it creates a better cupcake. I figured this out when I lived in my beloved teeny 300 sq. ft studio apt in Chicago, and didn’t have space to have BOTH a grater and a peeler. Well, ya can’t peel with a grater, but you CAN grate with a peeler…. (of sorts). Anyways, this produces longer thinner strands, but I use my industrial strength scissors to just cut ’em up once they’re all bunched in a bowl. Sounds tedious, but it literally takes seconds.

So, we have carrots. The other key? Cream-cheese-frosting- Y-U-M.

Frosted generously with the swirl by the back of a spoon. No fancy tools needed for these ones, and they still look pretty nice 🙂

This just leaves one problem… what does one do with the leftover frosting?!

Bust out the animal crackers… and a *few* sprinkles for a *little* fun: 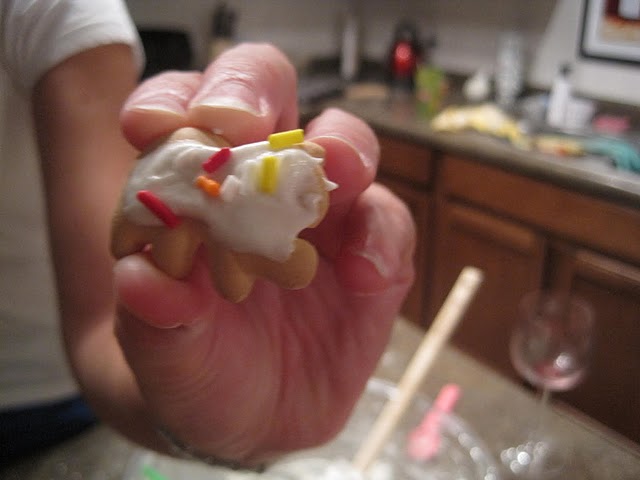 Can’t hold me back… party animal 🙂

Oiy, I’m cheating a bit. This post was supposed to be done in August, but alas, I was a bit behind on uploading photos and ba-logging about it. Anyways, Aug. 21 was a Domo-lover’s birthday, and what best to celebrate than with a Domo cake?!

Chocolate was the tastiest choice for this rendition of our brown, fuzzy friend…. And what better than a healthy coating of chocolate ganache, made decadent with heavy cream and semi-sweet chocolate chips. And of course, some chocolat-tatley cakeroo! (P.S. Pardon the cutesy made-up words, I’m semi-delirious from an exhausting work week) 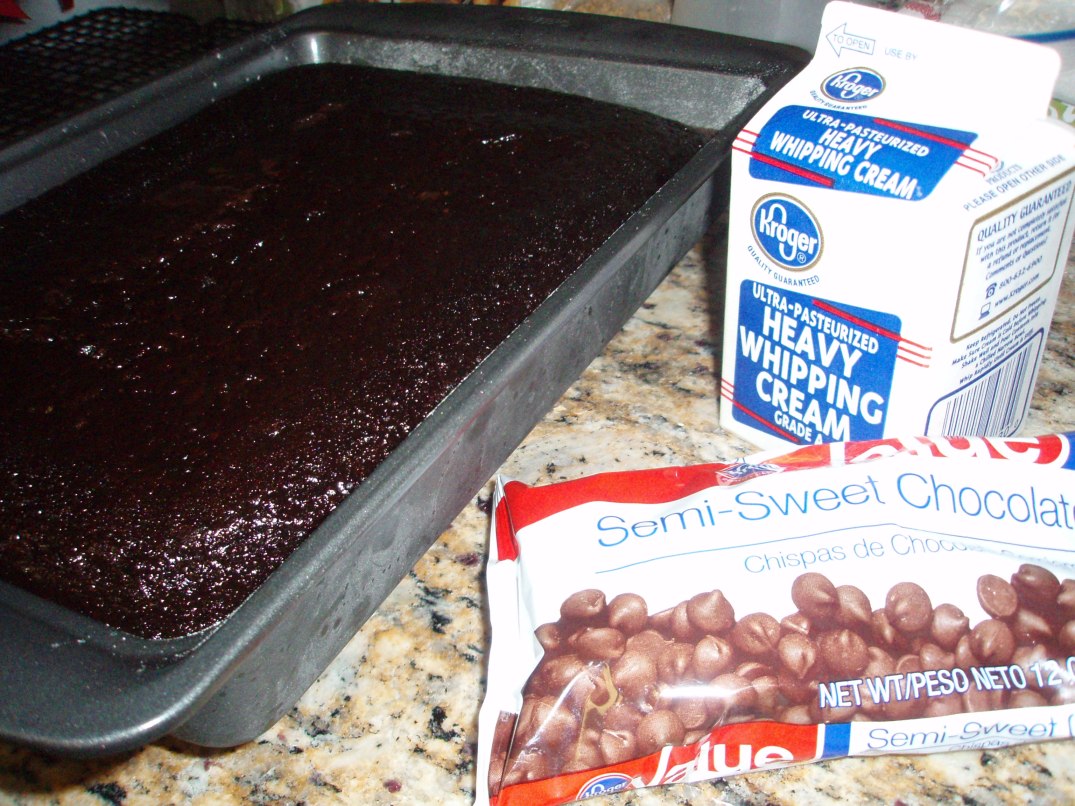 So, Domo has a red mouth. What better to do that with than red starbursts! It’s basically like edible, fruity play dough… yummm. I was also amazed at the quality control of the starburst factory. In this individual pack, I got exactly 3 of each color, for a total of 12. (Thank you, basic math skillz)

Here is a close up of ze face… with the rolled out red square for the mouth. I used pretzle m&m’s for the eyes, covered in blue fondant because the brown wasn’t showing up. Not a fan of pretzle m&ms, sorry to say. 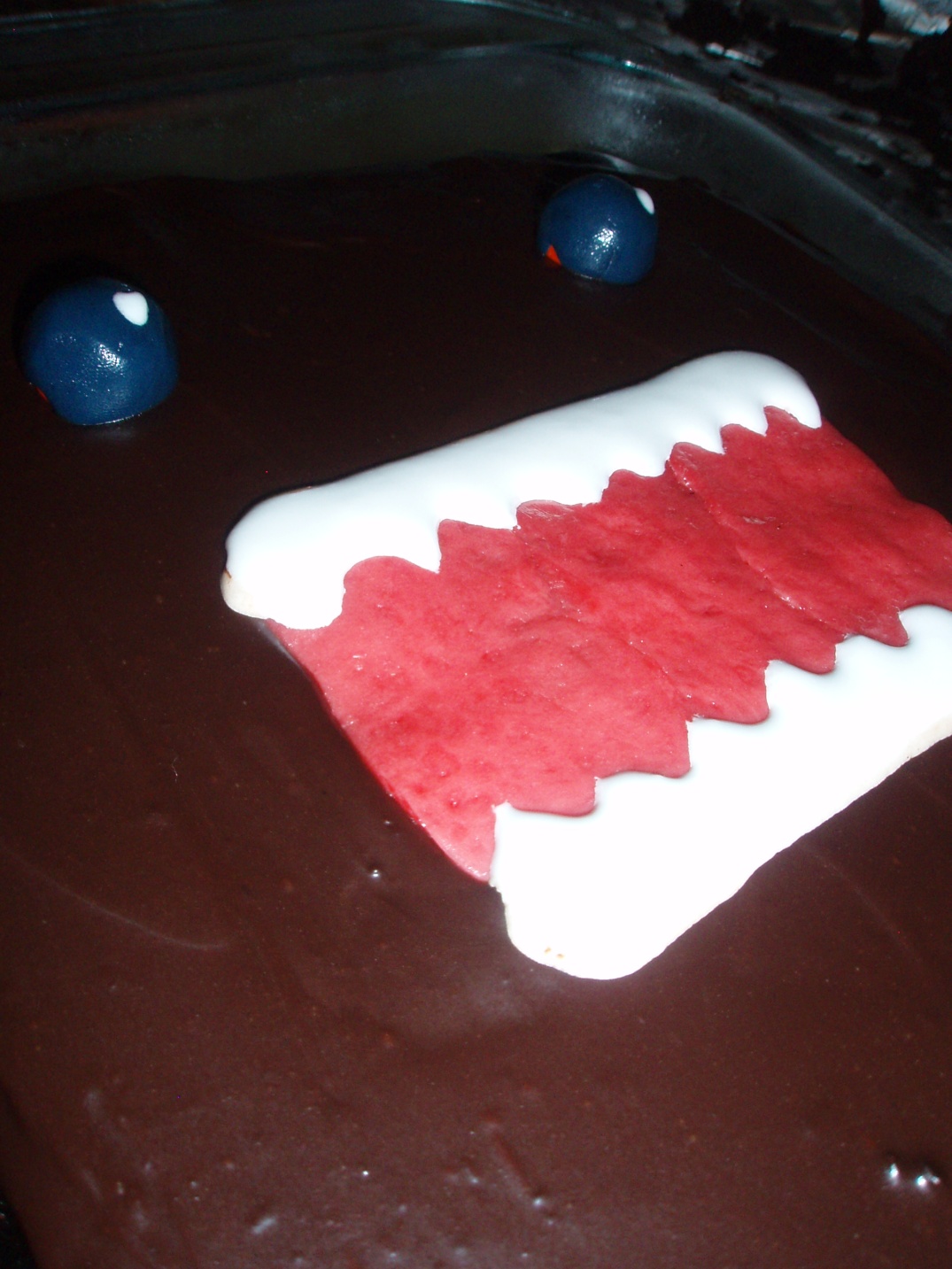 The white white of the teeth was made by piping marshmallow cream… Jet Puff!!!

I moved the cake into a nice glass pyrex dish so the brown glory could be seen. Here’s the entire thing…