Congratulations to another grad, Cory! He just finished his MBA at ASU, having spent the last two years working full time and going to school. Definitely a celebratory time… and what starts a party better than cupcakes?!

Lauren and Megan and I decided to bring some fun to the party with a playful pal. I used the Swamp Creature idea from the oh-so-famous, NY Times bestseller “Hello Cupcake!” 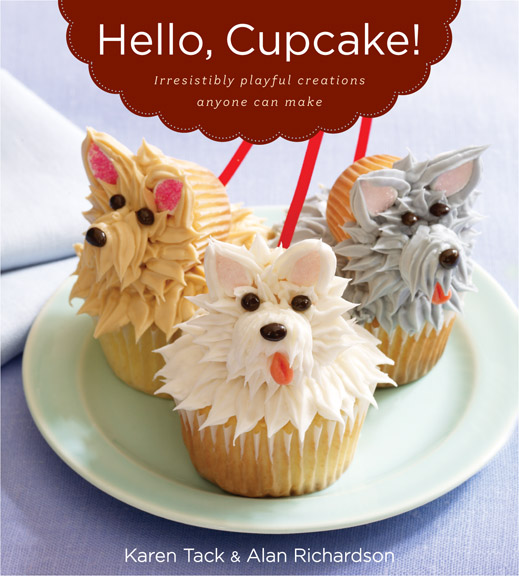 It’s a great book, with tons of fun ideas. Anyways, we did mister swamp monster, a.k.a. the crocadile…. Using chocolate cupcakes, a little green frosting, and some creativity/improvisation. Let the photo tour begin…

Step 1: Piping a nice “scaly” texture onto each cupcake, in green! 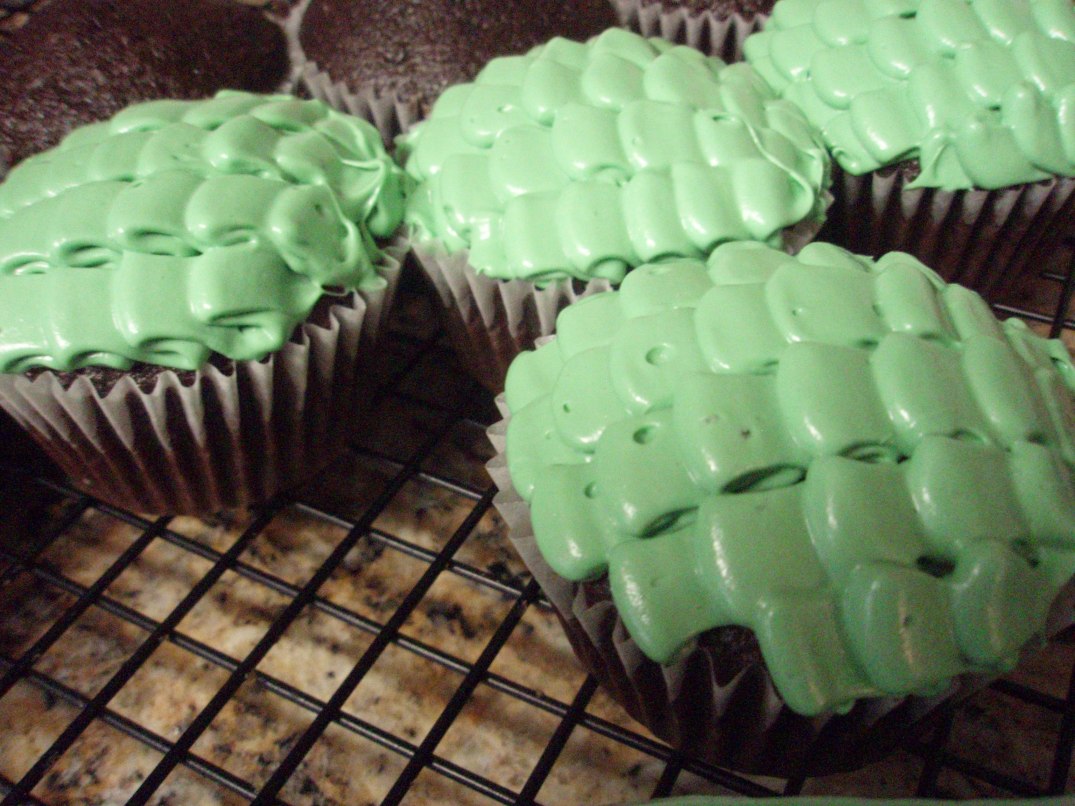 Step 2: Making the teeth out of marshmallow, and the claws (which were supposed to be banana runts, but apparently they are now an endangered candy as M&L tried 4 different stores for them) so we defaulted to some bright yellow fondant that I just happened to have laying around. 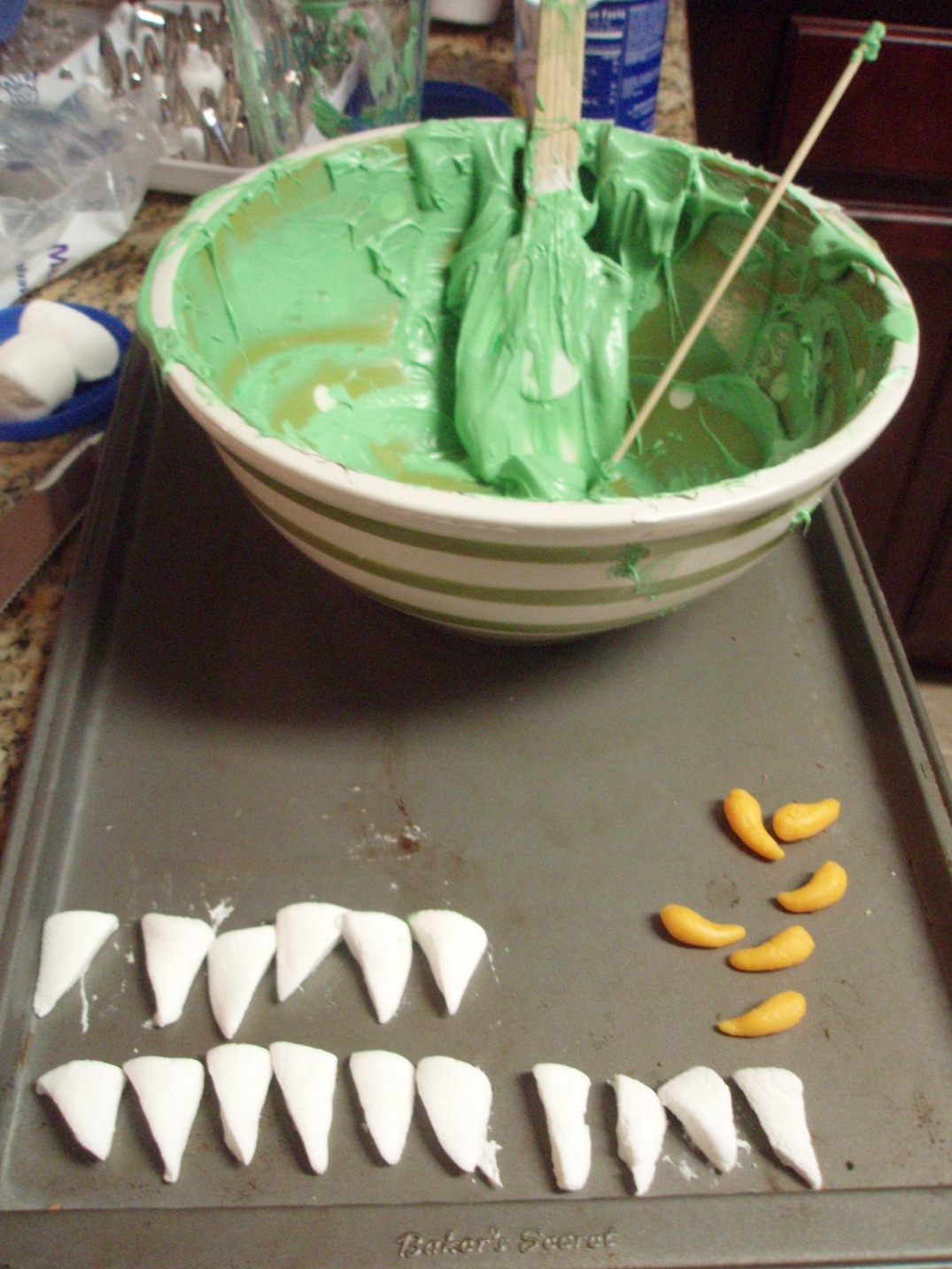 Step 3: Assembling the claws! And letting them hangout and marinate with my rice and soymilk in the fridge. Indeed. The spikes were made from fudge covered graham cookies, square shaped. We couldn’t find what the book called for, yet again improvising :). 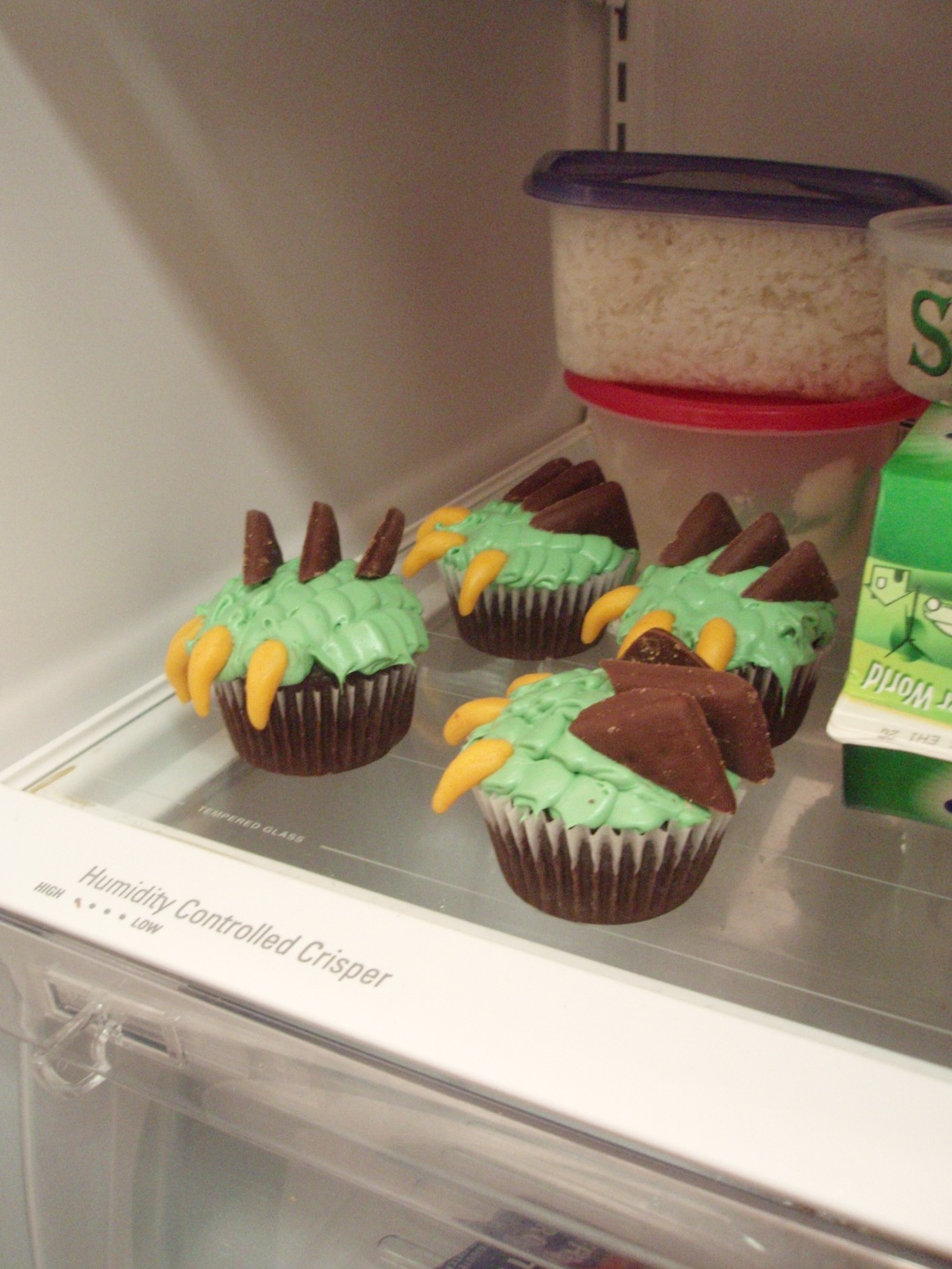 Step 4: Bringing the monster to life! The eyes were two giant marshmallows and the pupils? Two purple skittles. 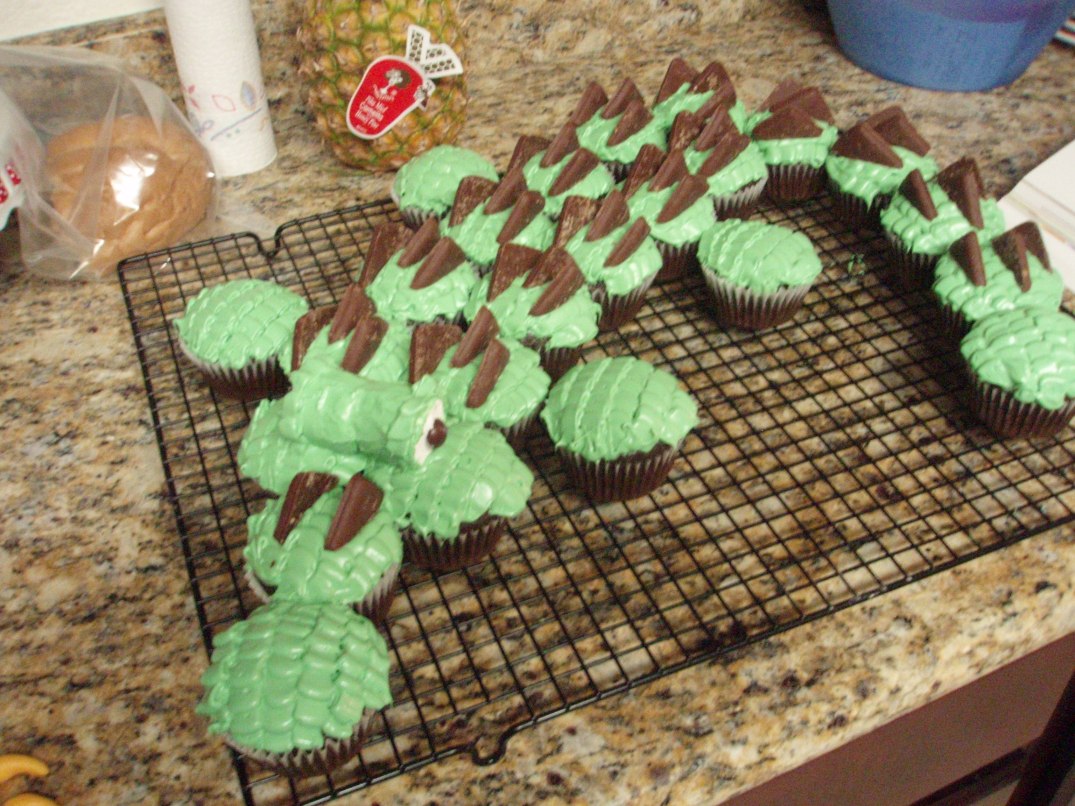 Step 5: Complete and photograph. Check him out on his aluminum foil bed, all ready for his close-up 🙂 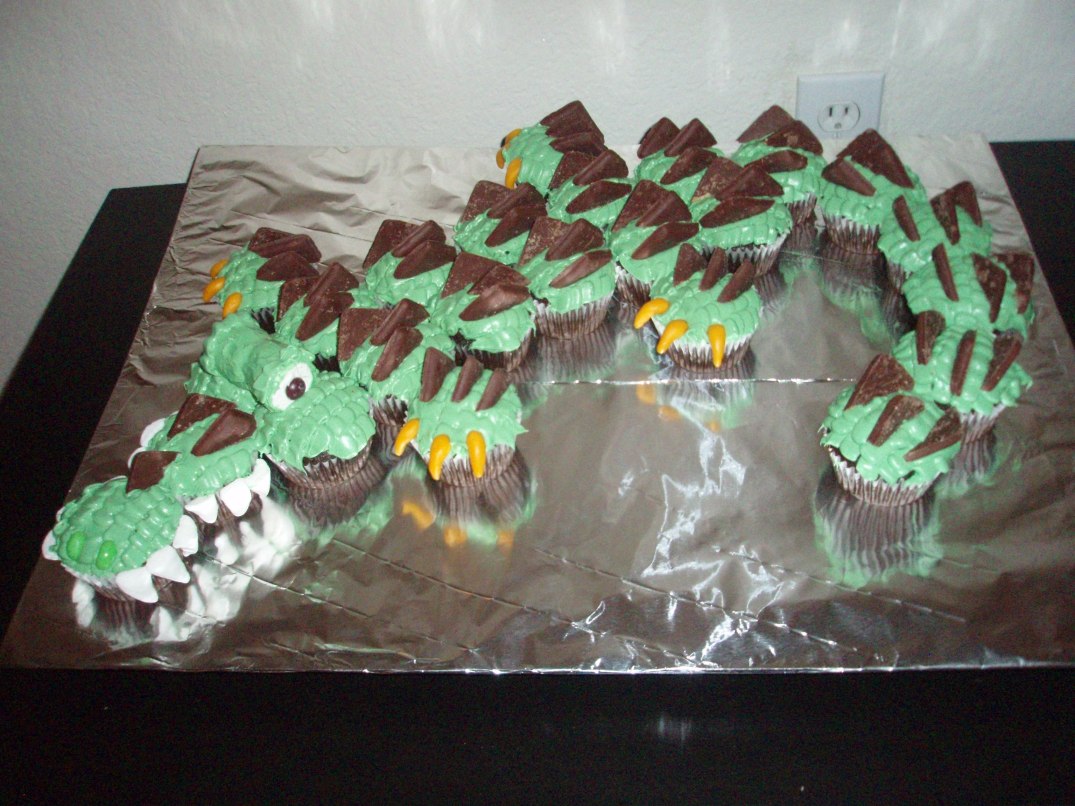 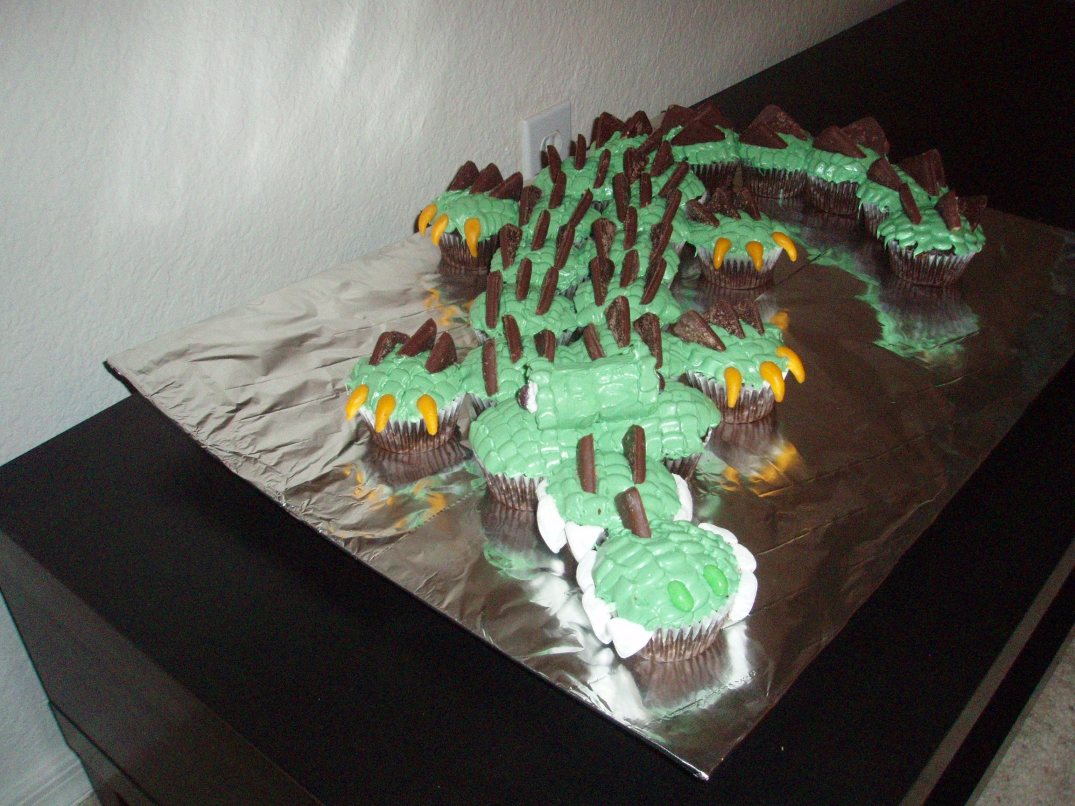 Ah, but it gets better. One of our friends suffered from extreme “croc-alepsy” as he “fell asleep” on his cupcake…. behold the consequences of enjoying a cupcake (and/or party) a bit too much. 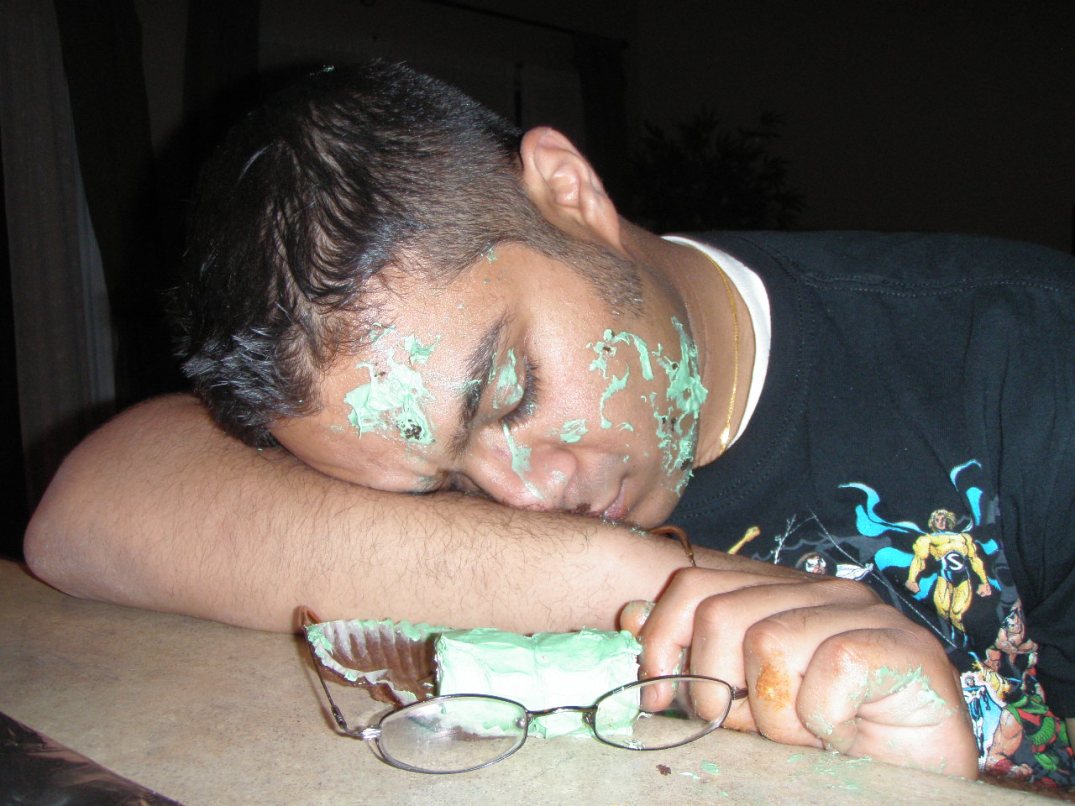 All that’s left are the eyes….!

It’s my 20th post! Coincidentally I have a bunch of wedding cake (mostly completed except for the third tier) photos to show… a culmination of “hard work” thus far… Hope you enjoy!

This Thanksgiving was really relaxing. I didn’t do much but eat, sleep, and do little craftsy things that I always have going on when I’m at home. After messing around with the snowman topper idea (posted earlier), some feedback and suggestions, I tried my hand at a cake topper that isn’t edible. (I found that molding people out of fondant and gum paste isn’t as easy as they make it look on Ace of Cakes, nor is it as simple to work with as clay.) I found some inspiration at a cute etsy store called “The Small Object…” and sort of worked from there. (She charges 135 for these wedding toppers, min. So I tried to re-create and personalize it.) Here we go:

Chris and Karen and Yu Teow, for a winter wedding scene: 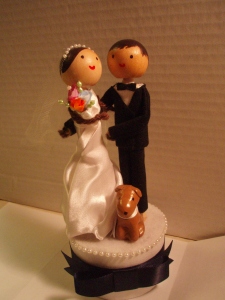 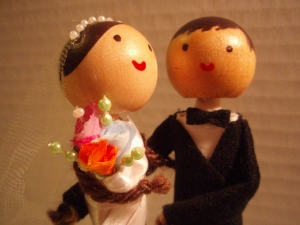 We had some confusion- the yarn is her arm, not hair extensions 🙂 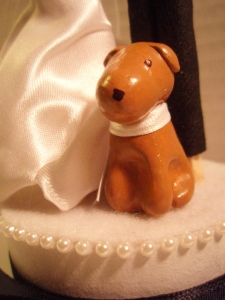 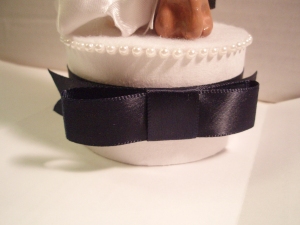 The base- with the navy ribbon, as on the cake.

Ok. So coming back, I wanted to see the entire thing put together (two tiers at least… I haven’t yet gotten around to tackling the 14 in. cake layer…::Shudder::) SoOoO… Here are some photos. I did the 10 in. fake tier in marshmallow fondant and experimented with royal icing. Meringue powder is a miracle invention. Who knew? Anyways… There are two options- the first is little piped dots (which I personally like better, they remind me of snow falling in a whimsical way, but don’t let me bias you) and the second is little piped star-type things. I was going for snowflake but I like simpler better. What do you think? Let me know! 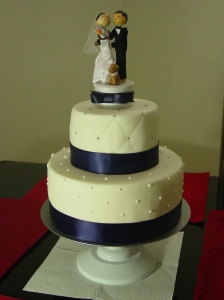 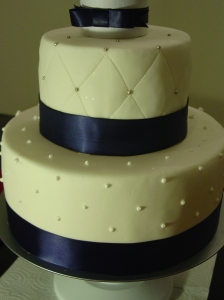 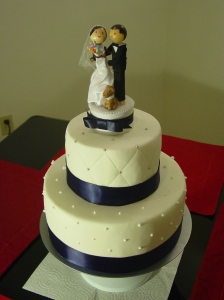 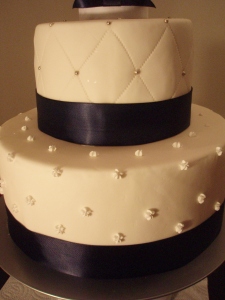 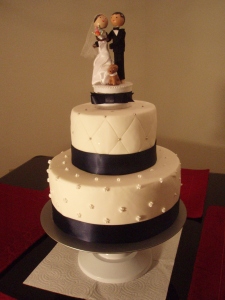 Phew… Who likes cake? Lots of recipes to try, coming up! 🙂

Tis the season of birthdays! I love it, more excuses for cake! This guy was a little tough conjure up- from idea to execution, when you have a friend who loves everything. Lauren, Megan, and I have been like the “three amigas” ever since moving out here to the Valley of the Sun- and we took a trip together to San Francisco in May. Hence, a San Francisco-themed birthday cake for Miss Lauren!

We’ve got the famous twisted Lombard Street that people will wait an hour and a half just to ride down for 90 seconds in their cars, Muir Woods with the impressive 1000+ ft. tall trees, some funky colored houses, and the Powell-Mason cable car, of course. All this plus a giant mint-chocolate flavored cupcake, and topped off with a fondant-impersonation of my red-haired friend (which I can’t take credit for, it was done by our budding fondant expert, Nick). NOMnomNOM!

Lombard and the Trolley (Powell/Mason). 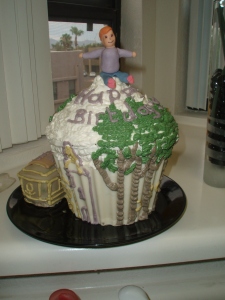 Muir Woods (Redwood trees) and funky houses, plus an overly-happy version of Laur. 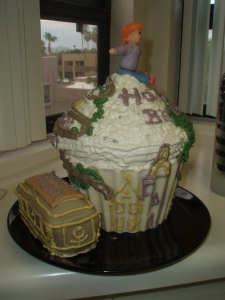 I finally busted out the fondant on mister cable car (should be practicing for more cake love to come). I think the difficult part for the entire look of the cake was getting the right colors! I guess you can’t do too much with four food colors in terms of brightness and hue. The entire cake was, therefore, a bit duller in color than I would’ve liked. Perhaps I’ll invest in the magenta/lime/cerulean/neon yellow set of food colors. Or a color wheel.

Lastly, we presented the cake at my community pool- in the dark! So details were difficult to make out. Always a funny back story, isn’t there? So my hour of hard work piping might’ve been in vain. But all is good, as long as everyone had a good time, some good cake, and I got my photos! 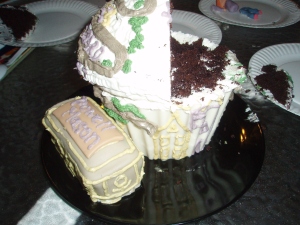 Next challenge… tackling the mess in the kitchen. 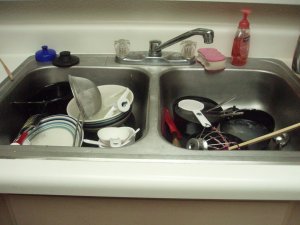